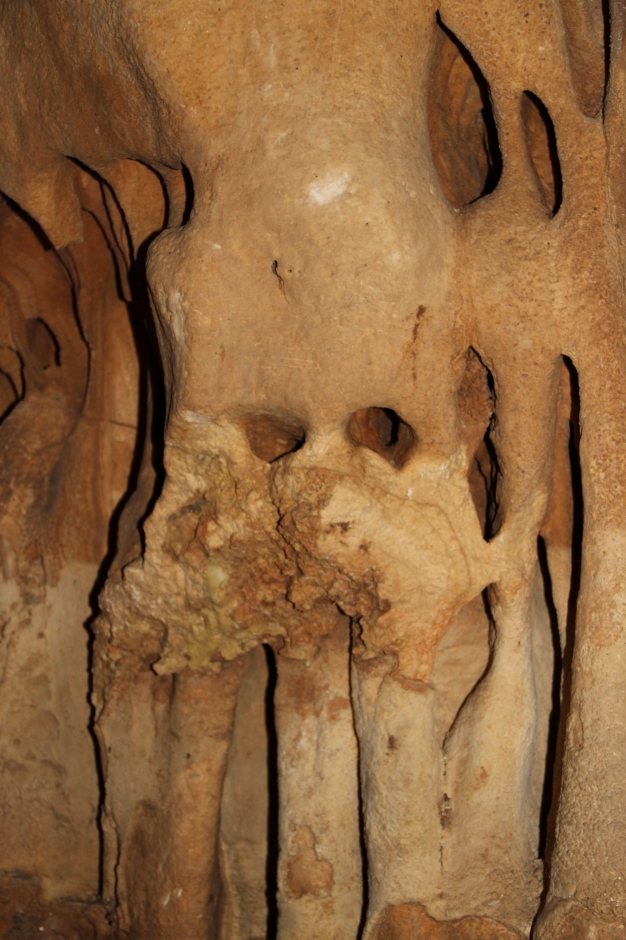 Natural Bridge Caverns is this huge underground cavern in San Antonio that was discovered in the 1960s and opened up for tours and such. There are multiple rooms and tons of geology things the names of which I don’t remember.  But all the various formations are really cool.  This was one of the creepist!

This is David.  As you can tell from his shirt, he used to be in the Marines. Dani’s behind him – don’t ever tell them I said this, but they’re a super cute couple.  He was really excited about the trip! (Mostly, David and I get really excited about things and Dani puts on her teacher voice – she’s a math teacher – and reminds him to behave. I can get away with more because I”m not married to her.)

This was a little natural cubbyhole in the wall.  It’s at 90+% humidity all the time – just the type of weather I like – and there’s slime over many of the rocks.  I was surprised at the many different colors my flash revealed.

After they installed lights for the tours – very carefully, and with lots of gloves, we’re told – they found a few ferns that grew! Ferns are some of the oldest plants around and are remarkably good at surviving.  Anyway, they have tried very hard not to cause man-man alterations, but where humans go, change follows. 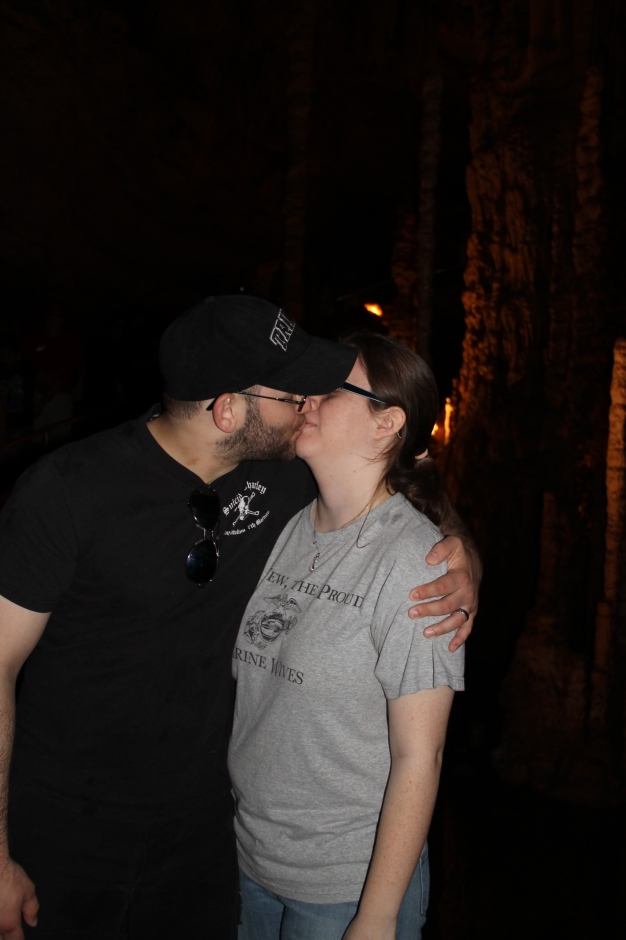 They’re newlyweds… Some ickyness to be expected.  Behind them you can see some of the huge formations that were very hard to capture in pictures with any sense of scale – some of them were 50 ft tall!

These are what I like to call the jellyfish rocks.  It was my favorite formation. (Although what I would have really loved is for a rock that looked like a sea turtle.) 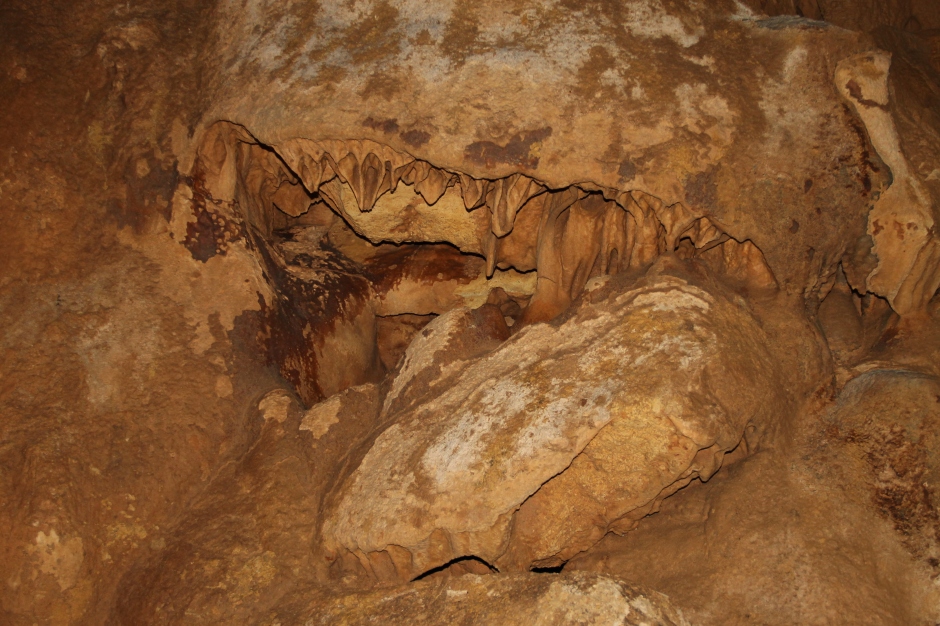 “I have a big head and little arms!”  Maybe I have an overactive imagination, but nearly all of the formations looked like something – a lot of them looked like religious figures, giving the whole place a rather holy feeling.  There was a Buddha,  a totem pole, and a three wise kings scene that I can recall.  This one, however, less so.

There were several food ones – this and some that hung off the ceiling with reddish streaks that looked like bacon.  They had a specific name, but I don’t remember it.

Now this one reminds me of a French court, a la Marie Antoinette.  Or perhaps a Nativity scene.  Forgive the lighting; my flash isn’t very good.  And I’m not very good with it. 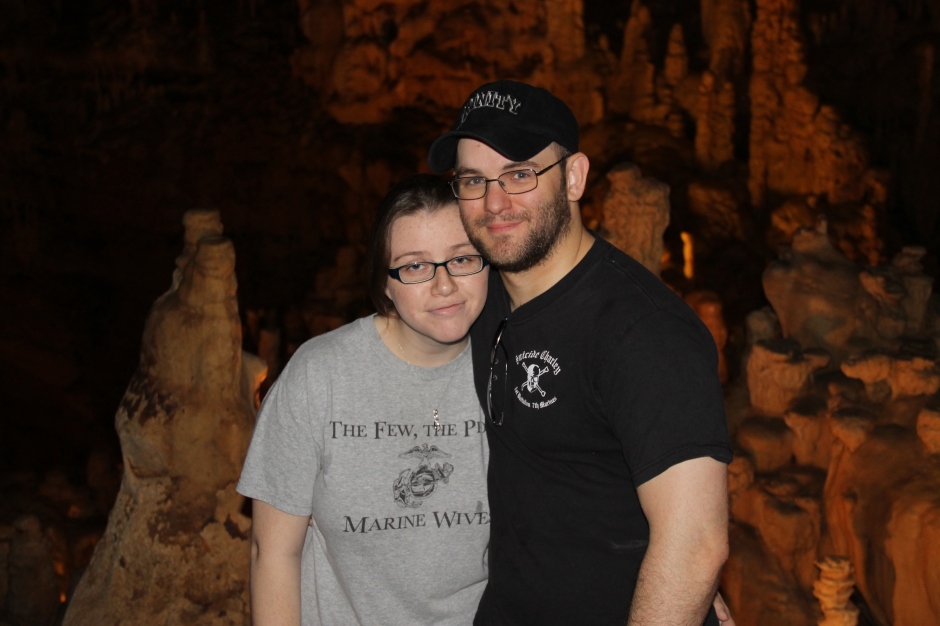 They’re in front of the castle formation.  It’s hard to tell this close up, but it really did look like a Disney castle.

This is Dani and me. (A rare picture of me, I can assure you.  I don’t normally let other people touch my camera.) I’m not actually taller than her, so I must’ve been standing on a small rock step.  We were standing on a overlook point, where you could see down into a room below that we had just walked through.

The three wise men or mages or kings… I forget… Perhaps it would better to say the three who followed the star of the birth of Christianity? A nice pun in there. 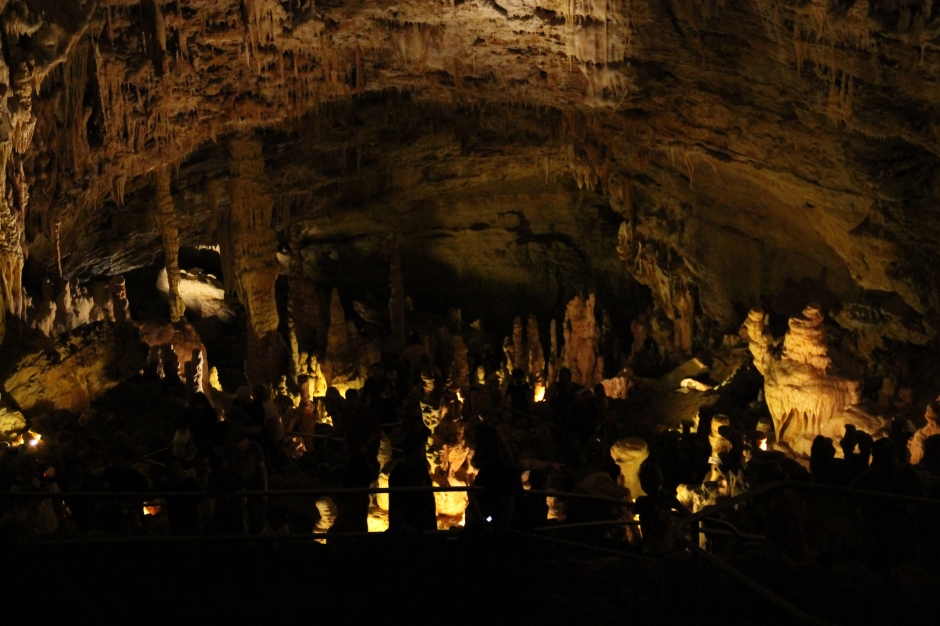 The view from the overlook where Dani and I were standing.  A careful examination will reveal people milling around.

This is the end of my Natural Bridge Caverns adventure! Stay tuned for my adventures in the Wildlife Ranch and more of Dani and David 😀