I finally gave in and bought a new pair of boots.  My old ones have had no traction since last April, so it’s fair to say it was time.  I ended up with Ahnu’s Montara boots and I like them so much I thought I’d write a review. 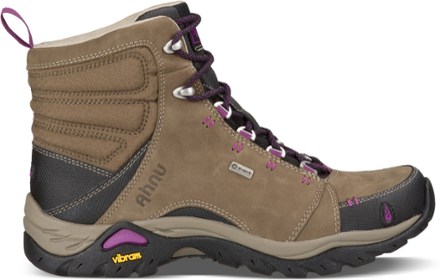 Last Sunday I took them most of the way up Monroe and it was a perfect day to really put them through their paces.  It was rainy, wet, steep, slick, and we crossed several streams.   The boats performed excellently!  They’re really comfortable, have great traction, and are reasonably waterproof.

But my favorite part is how light they are – they’re thin and weigh hardly anything.  They don’t weigh down your feet at all.  To make that happen, they have a relatively thin sole – which I love – and less ankle support, which doesn’t bother me at all. If you’re like me and want to wear as little as possible on your feet at all times, I’d seriously suggest trying these boots out.

They come in a pretty blue, which would have been my preference – all of my hiking gear is blue – but EMS only had brown in my size.  But since my plan is to cover them in mud on a regular basis, I don’t think the color really matters.

Also, no fear! I’ll have pictures from Monroe up soon and more adventures to come.