Our final sightseeing stop was the Coral Castle in Homestead, Florida.  Coral Castle is an outdoor castle, built entirely of coral by a Latvian named Ed.  Ed was jilted a day before his wedding in Latvia, moved to the USA, and eventually jumped on the slightly crazy train, spending 28 yrs building, by hand and without power tools, two outdoor castles. (The larger one is open to the public and a historical marker.)

But first, a picture of Brenda, with her giant diet Coke.  I’ve seen beers in that size but never cokes! 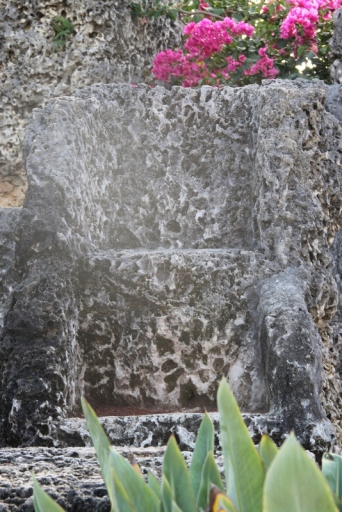 The man’s throne in the castle.  (There was also a throne for the wife, the child, and the mother-in-law.  But the mother-in-law’s was very uncomfortable, so as not to encourage visits.) (Also, Ed never married or reproduced.)

A Freemason’s symbol on top of the outer walls. 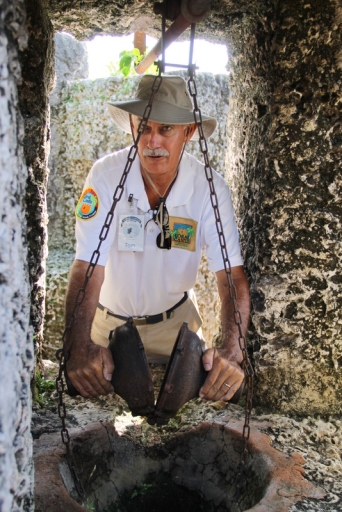 Our tour guide showing us the grill, where Ed used to cook hot dogs (inside the metal cup thing) and sell them to tourists. Ed, despite spending more than a decade building a castle for a fiance who jilted him, was an astute businessman. 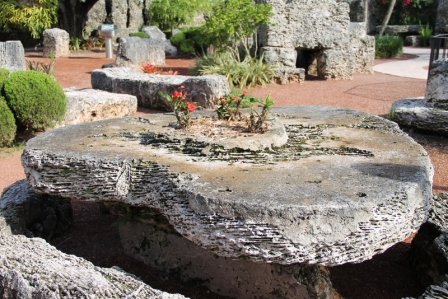 Ed also built this ex-fiancee, whom he referred to as Sweet Sixteen, a heart table.

He built a sitting room based on the story of Goldilocks and the 3 Bears.  We all took some time sitting in the furniture.

Brenda posing in front of a very large bromeliad.

Kendal, reclining on the reading chair, which wasn’t terribly uncomfortable.